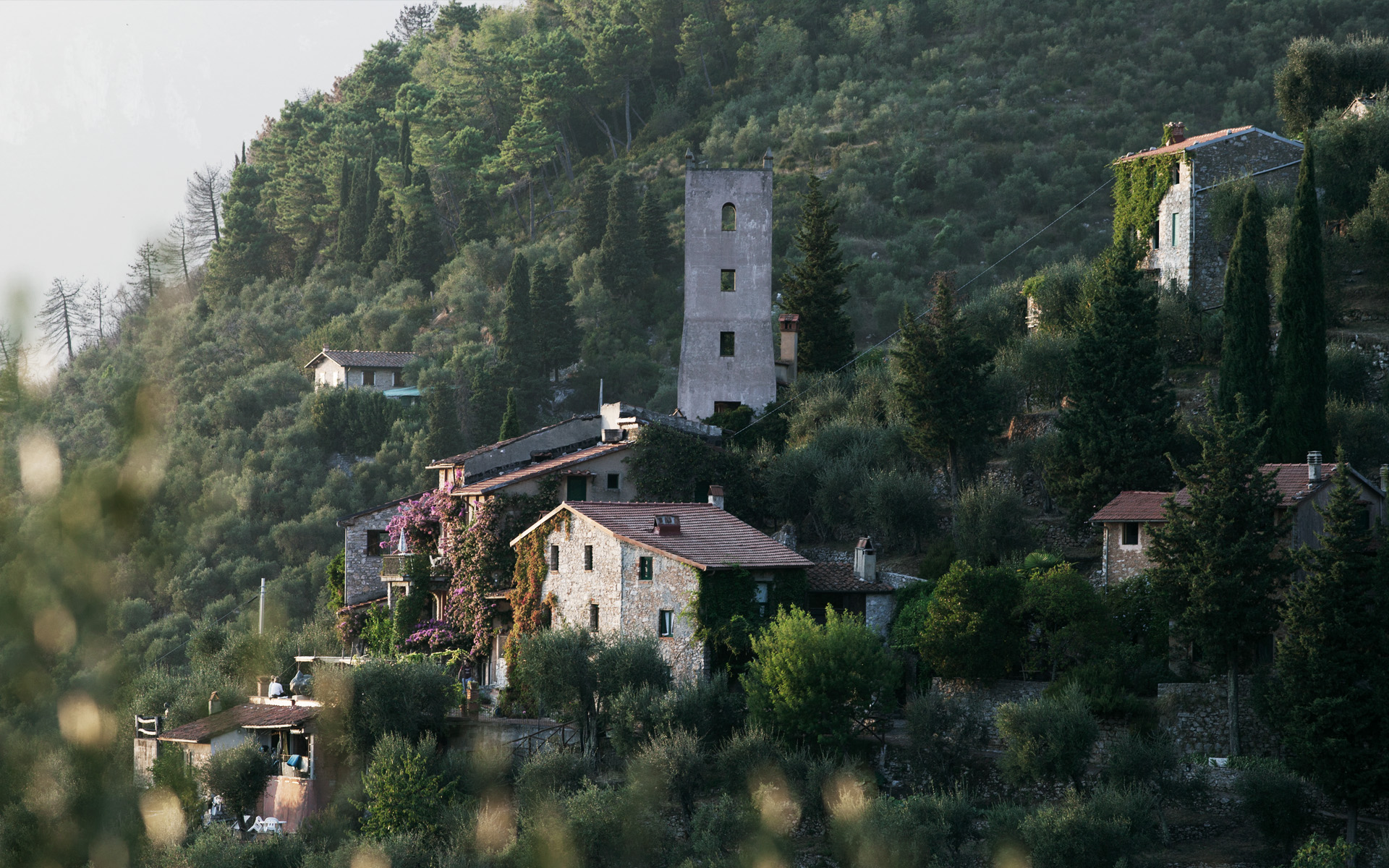 The beautiful hamlet of Peralta behind Viareggio and Forte dei Marmi 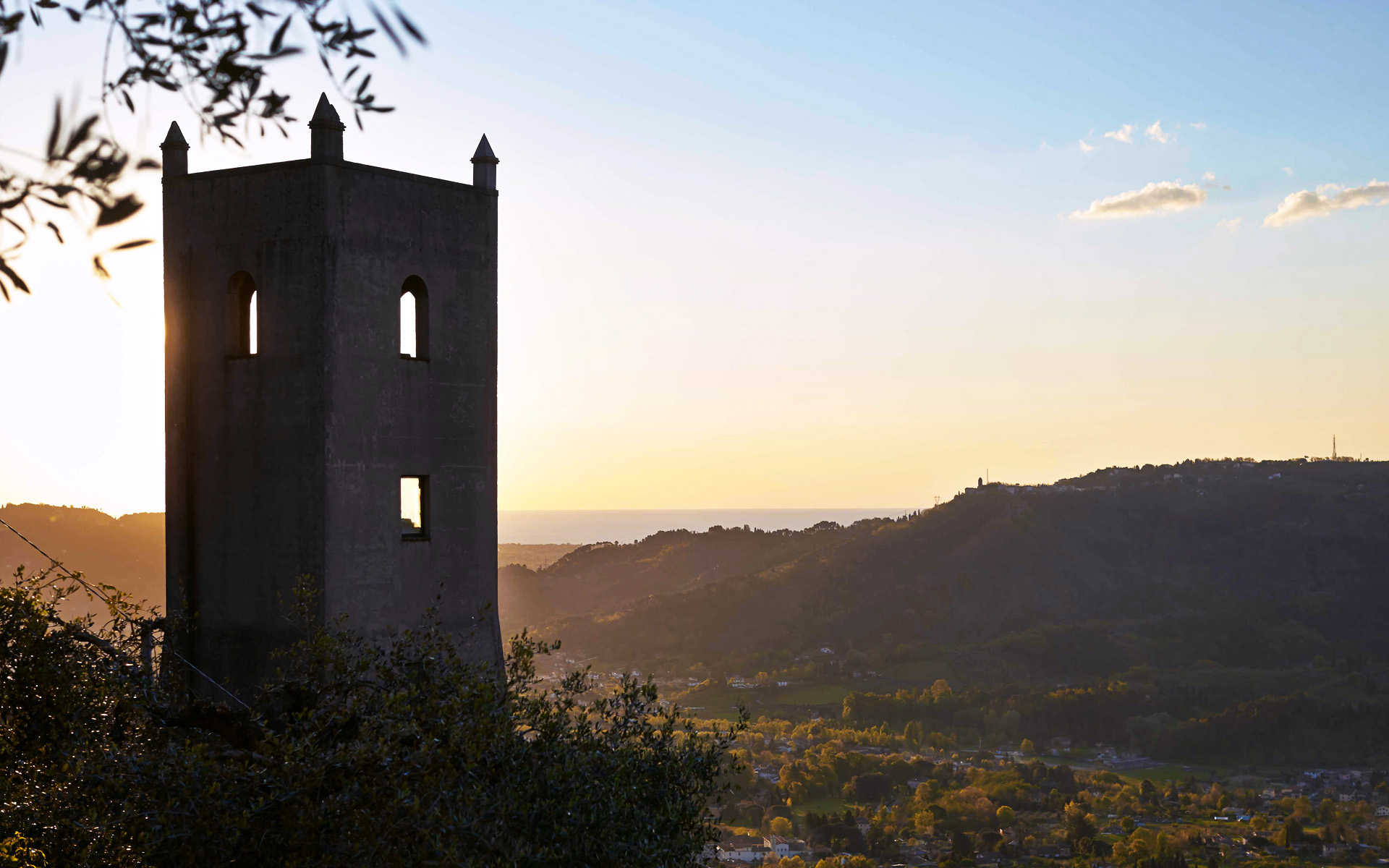 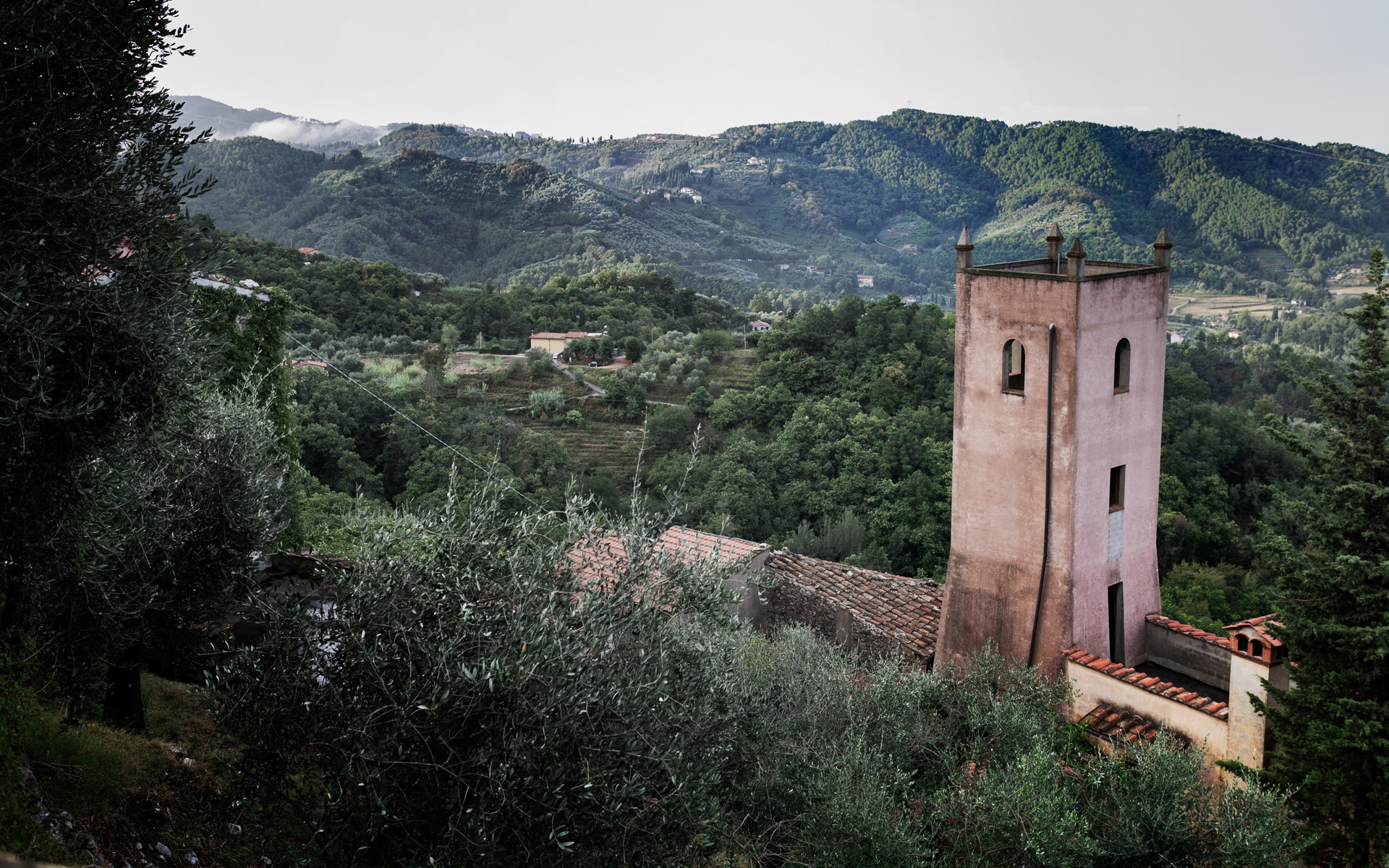 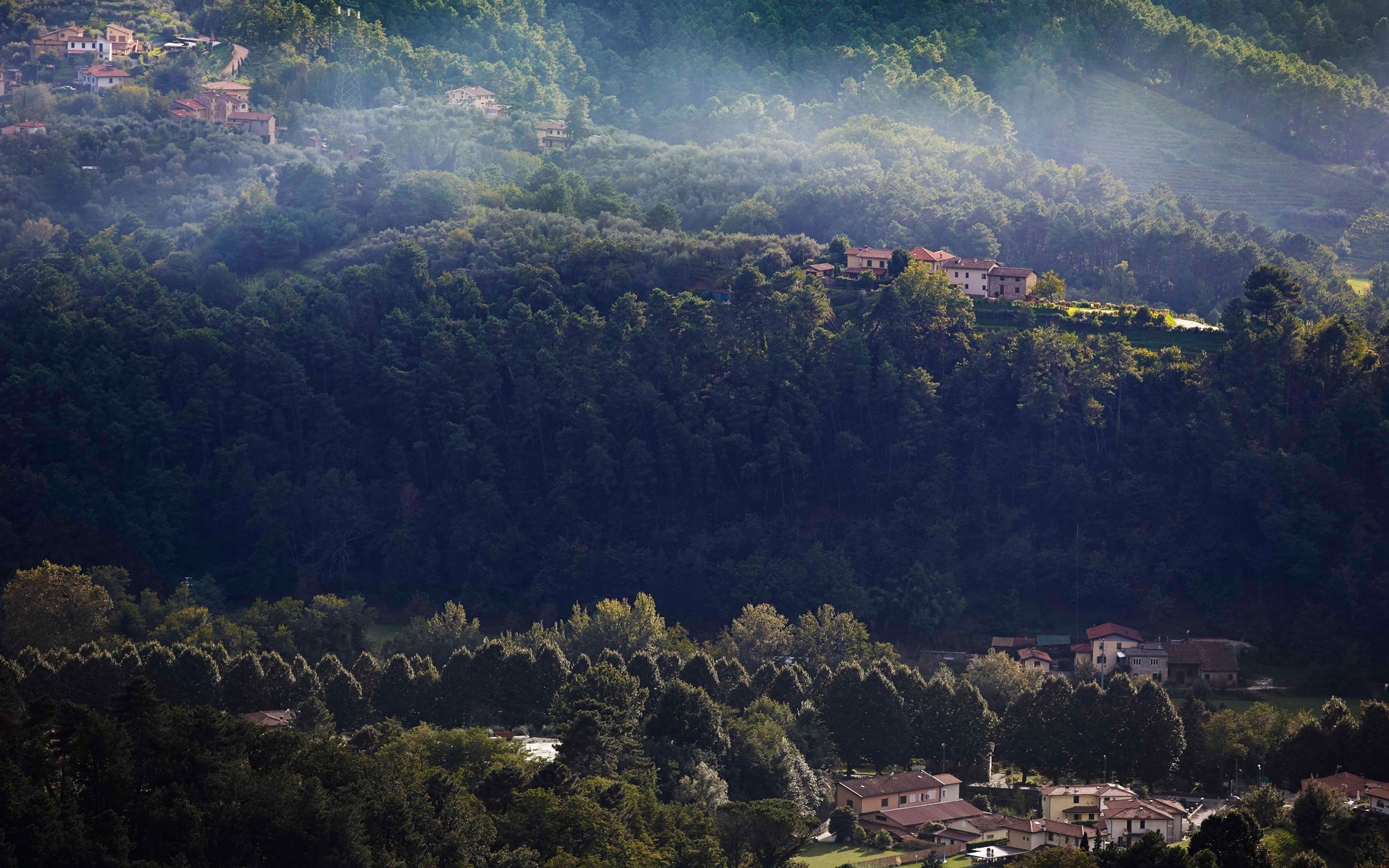 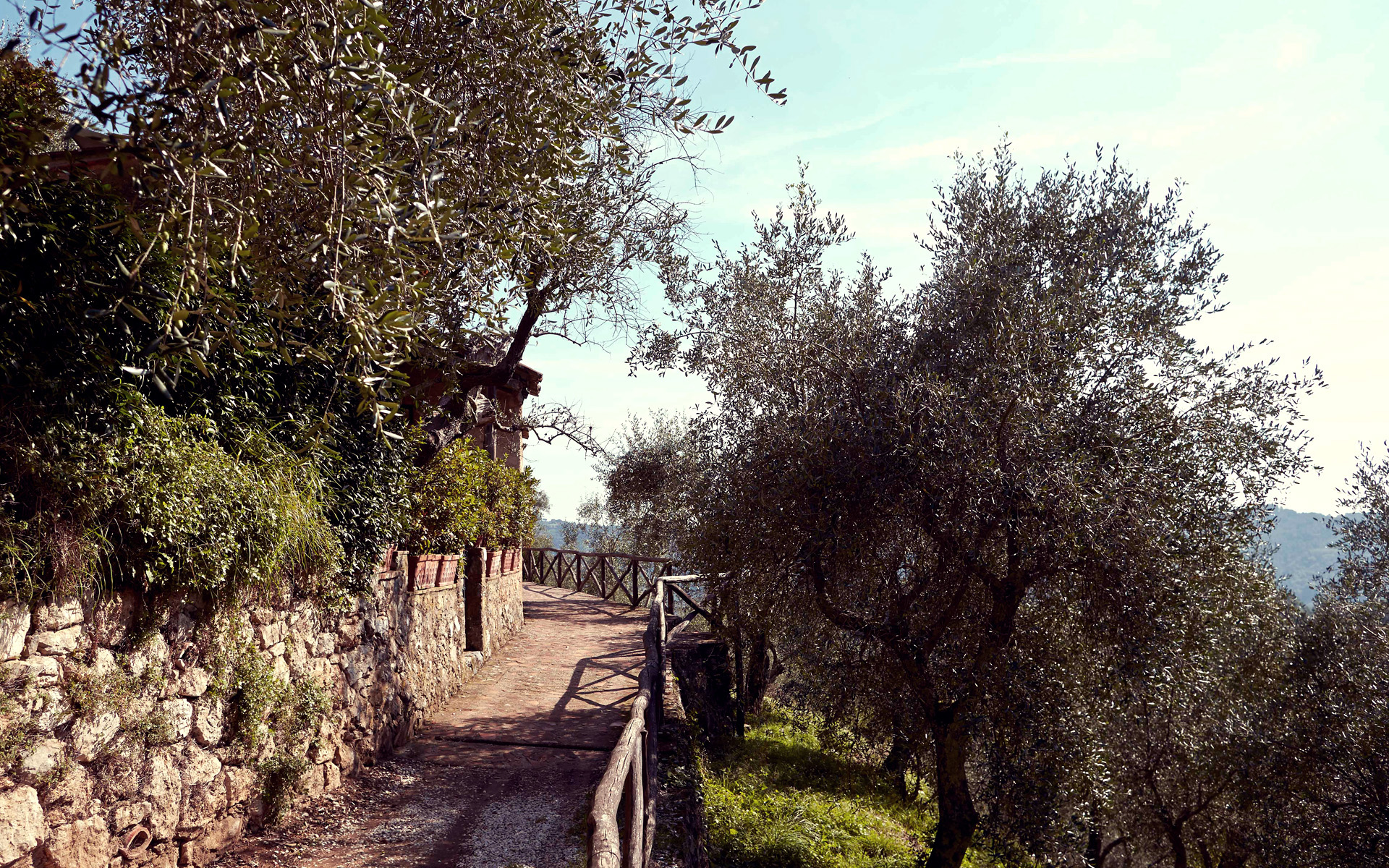 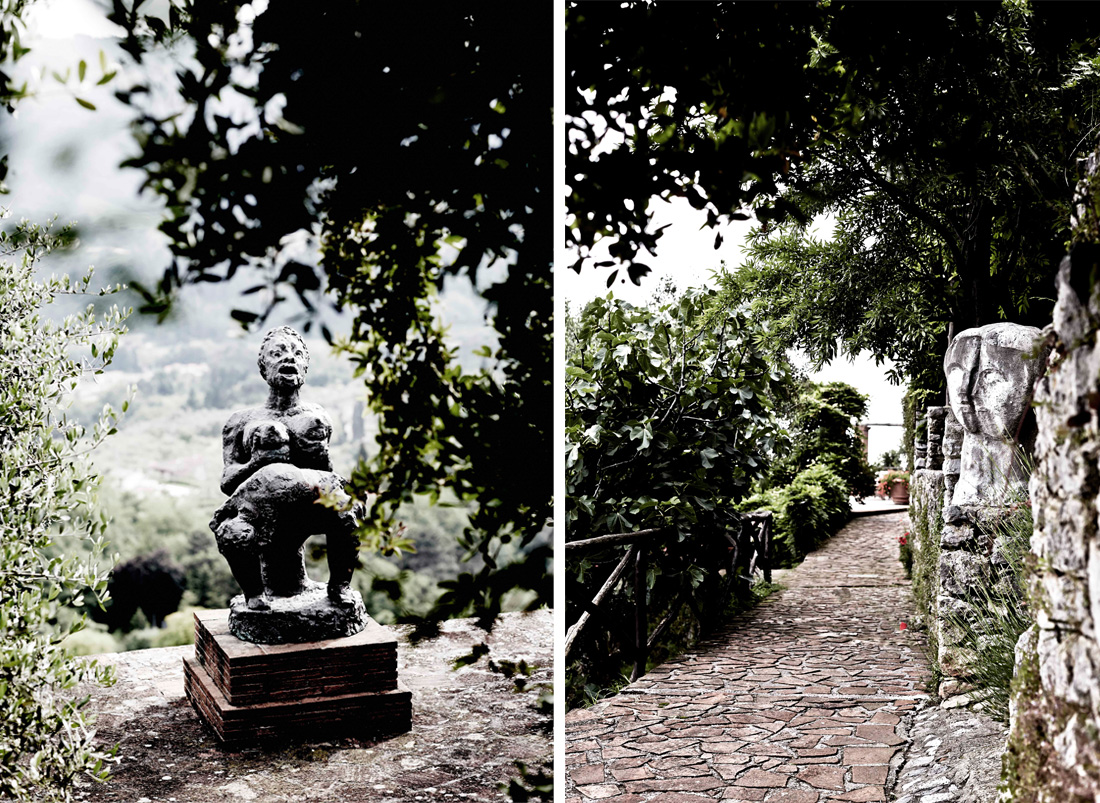 Peralta was restored with great love and imagination by international sculptor Fiore De Henriquez. You can see her work is all over the hamlet. Fiore lived and worked in Peralta until her death in June 2004. The result of Fiore’s work is an inspired creation and one feels this special atmosphere immediately upon arriving. The hamlet of Peralta is peaceful, beautiful and has an indefinable notion of being somewhere out of the ordinary.

Records of the hamlet of Peralta date back to the fourteenth century when Castruccio Castracani, lord and protector of the province of Lucca from 1316 – 28, built one of his ‘Castello’ on the brow of the hill above Peralta. It is believed he built the stone dwellings that are now the hamlet of Peralta to house his soldiers, but there is no official record of this.

The foundations of the ‘Castello’ can be seen a few hundred metres up the hill above Peralta.

Subsequently, there is no recognition of Peralta itself until the 20th century when we know it was inhabited by families managing to survive mainly on the produce from their olives, sheep and chestnuts. It was a very poor existence and in the mid-1950s, when the western world was getting back on its feet after the second world war, the families saw the chance of making a better living elsewhere and abandoned their hillside houses and headed for a new life.

By 1967, when the sculptor Fiore de Henriquez first discovered Peralta, all the houses of Peralta had been abandoned except for two. Fiore was staying at this time with American sculptor Jacques Lipchitz and his wife Yulla in Pieve, further down the hill towards Camaiore. 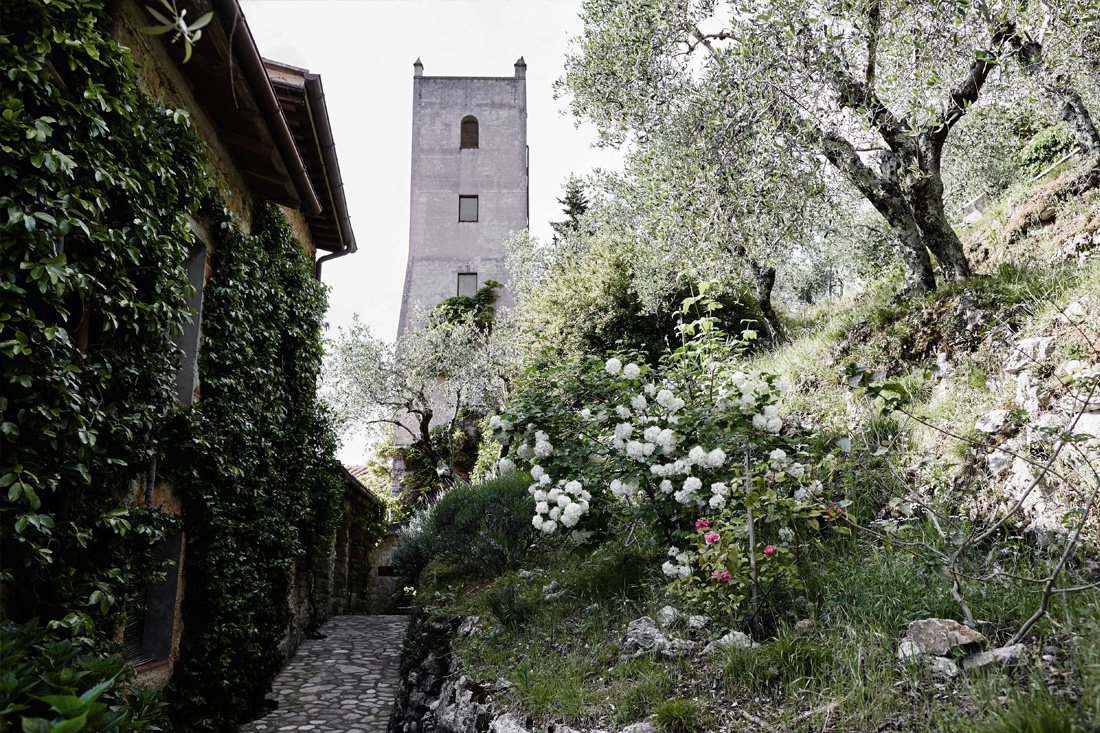 In those days, it was hard to get up the hillside to reach Peralta as there was no road and no obvious access. A friend from Camaiore offered to take her up one day, using the footpaths that were at this time mainly used by sheep. The next-door hamlet of Agliano was also only accessible by footpath.

At least ten years of neglect had left most of the houses without roofs and windows, and in some cases, even the floors had disintegrated. Everything was overgrown with brambles and undergrowth and Fiore found only empty, falling down houses, except for two.

However, she immediately fell in love with the place and decided she just had to try and restore it. It was an artist’s romantic vision and quite irresistible to a character such as Fiore.

A bird flew over Peralta with a camera 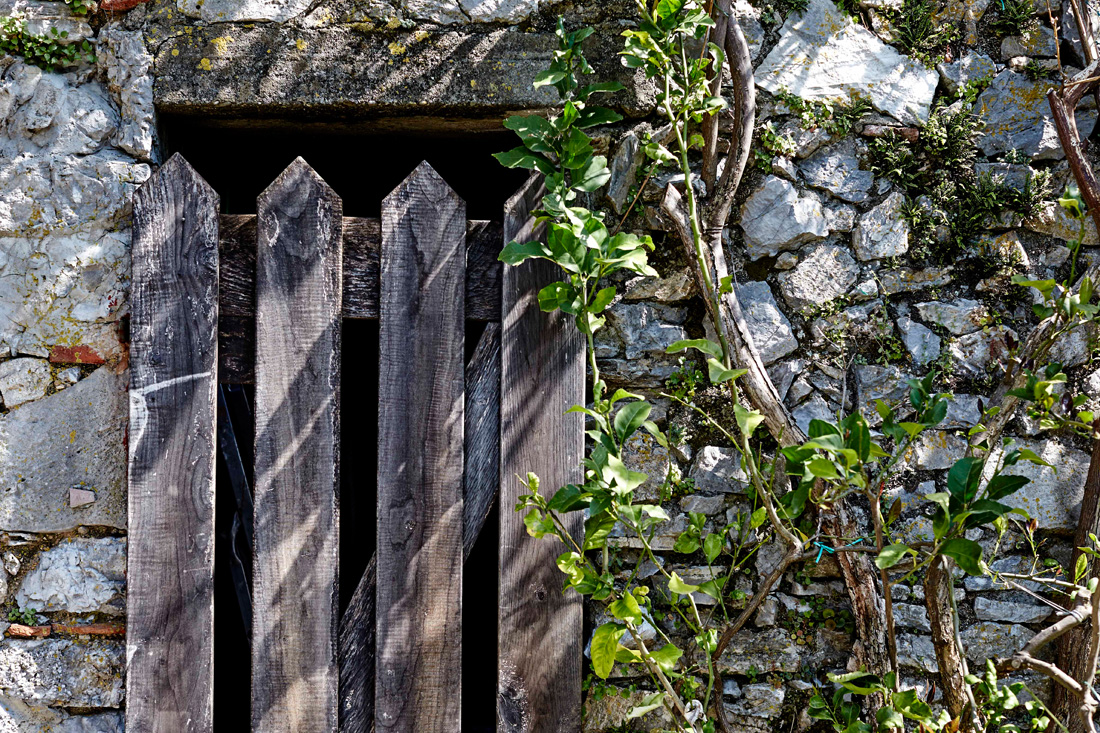 Fiore bought the first house in 1967 and moved in in 1968. A tiny house with one room up and one room down lived in by a family of three. It was the only one of two houses still inhabited and there was no electricity, no running water and terrible access. 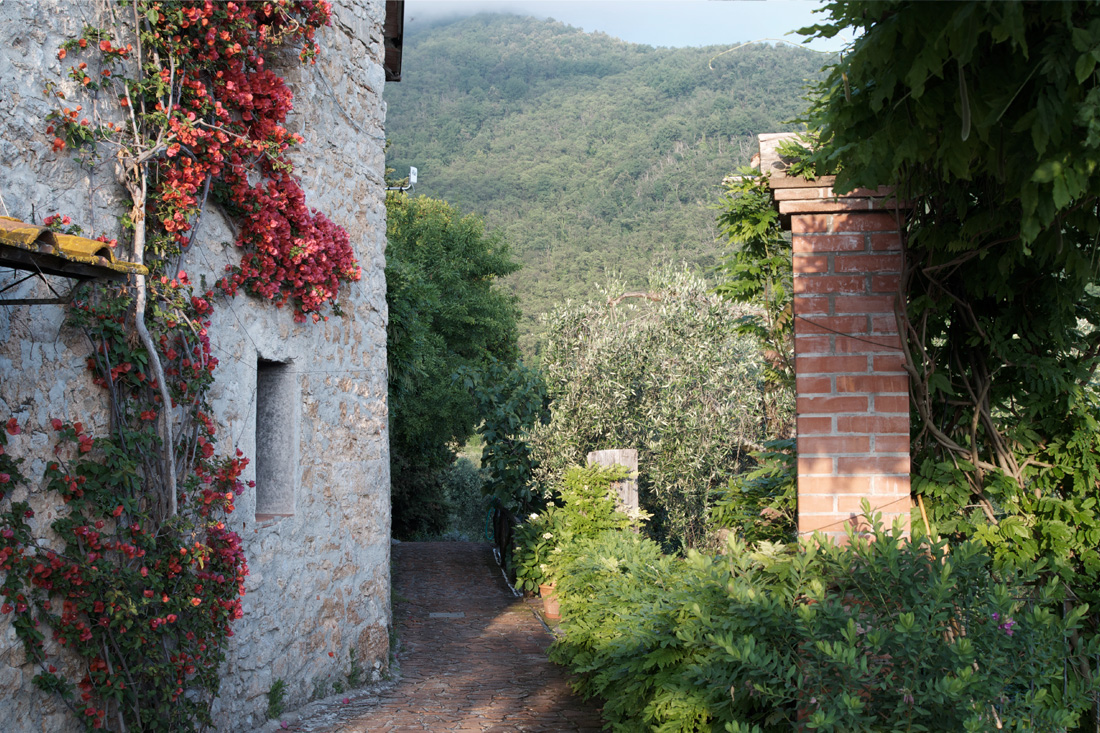 Undaunted by the mammoth task that lay ahead, Fiore set about fixing the little house, and also slowly discovering who owned the other houses, contacting them and buying the houses. Some of the previous owners lived as far away as the U.S.

Thus began the long adventure of restoring Peralta to the beautiful place it is today.

The hamlet in photos

Fiore’s sculpture is everywhere at Peralta. The monumental ‘Araba Fenice’ (The Phoenix) looks as if it is flying off the main terrace in front of the hamlet of Peralta. Fiore would say that this sculpture is a symbol of Peralta ‘rising from the ashes’, referring of course to the restoration work. 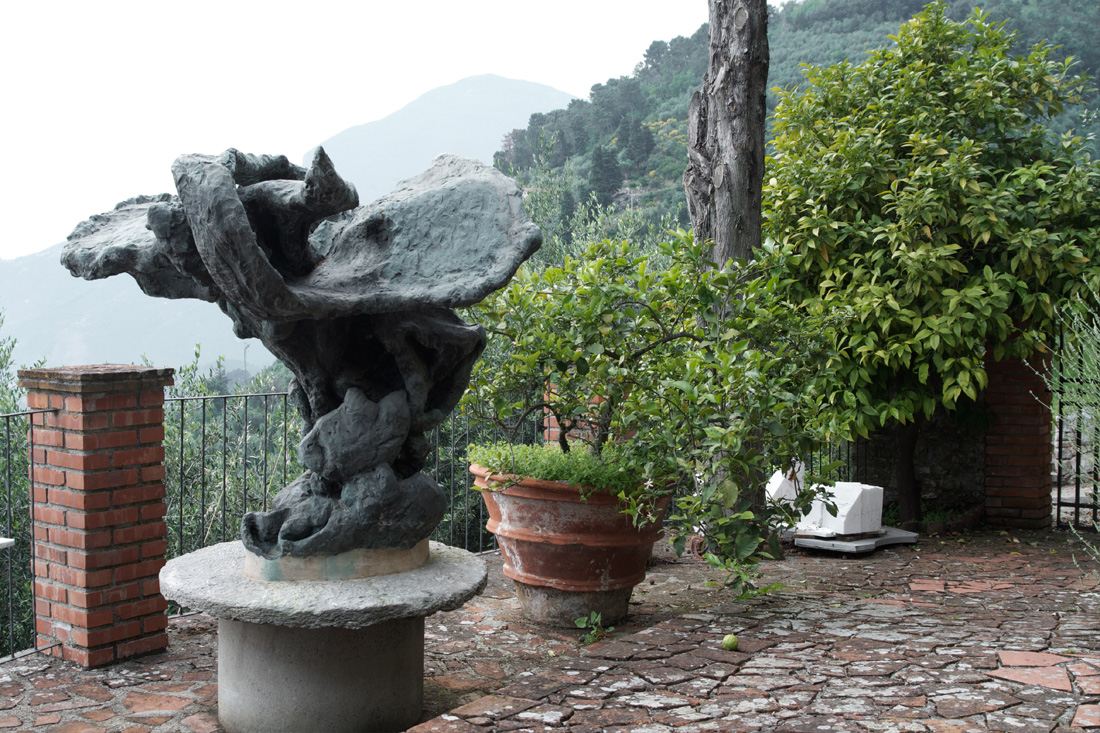 ‘The Mask’ sits below the path leading to Peralta from the parking lot and is the first sculpture you see on arriving.

‘Gemelli’ was sculpted in Carrara marble and represents two heads joined together.

In front of the little Chapel stands the ‘Calabrian Woman’. Fiore was inspired to make this piece while in Calabria. She saw a peasant woman coming from the olive groves with a stillborn baby in her arms.

The Growth of Life was originally commissioned by the architect Pei for the Kipps Bay Plaza in New York, where it now stands. Fiore also made one cast for herself, and this is on the terrace of Casa Nuova.

“The African Woman, also in bronze, is on a small terrace in front of Peralta and was inspired by a visit to Harlem. Inside, stands a boy dressed as a Cowboy. This is in plaster, the bronze cast having been commissioned by his family in Australia after the boy had died by drowning. 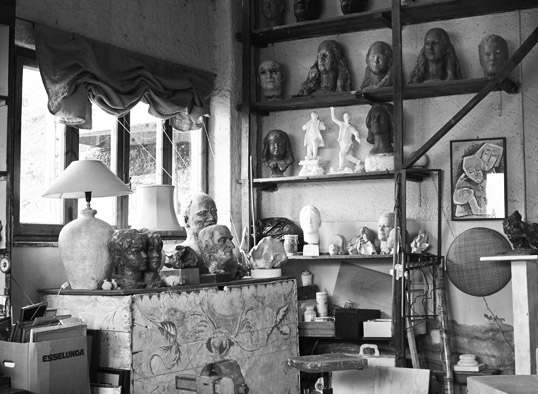 Most of Fiore’s sculptures or drawings are dispersed around the hamlet. We have kept the atmosphere she created and her spirit lives on in Peralta through her art. 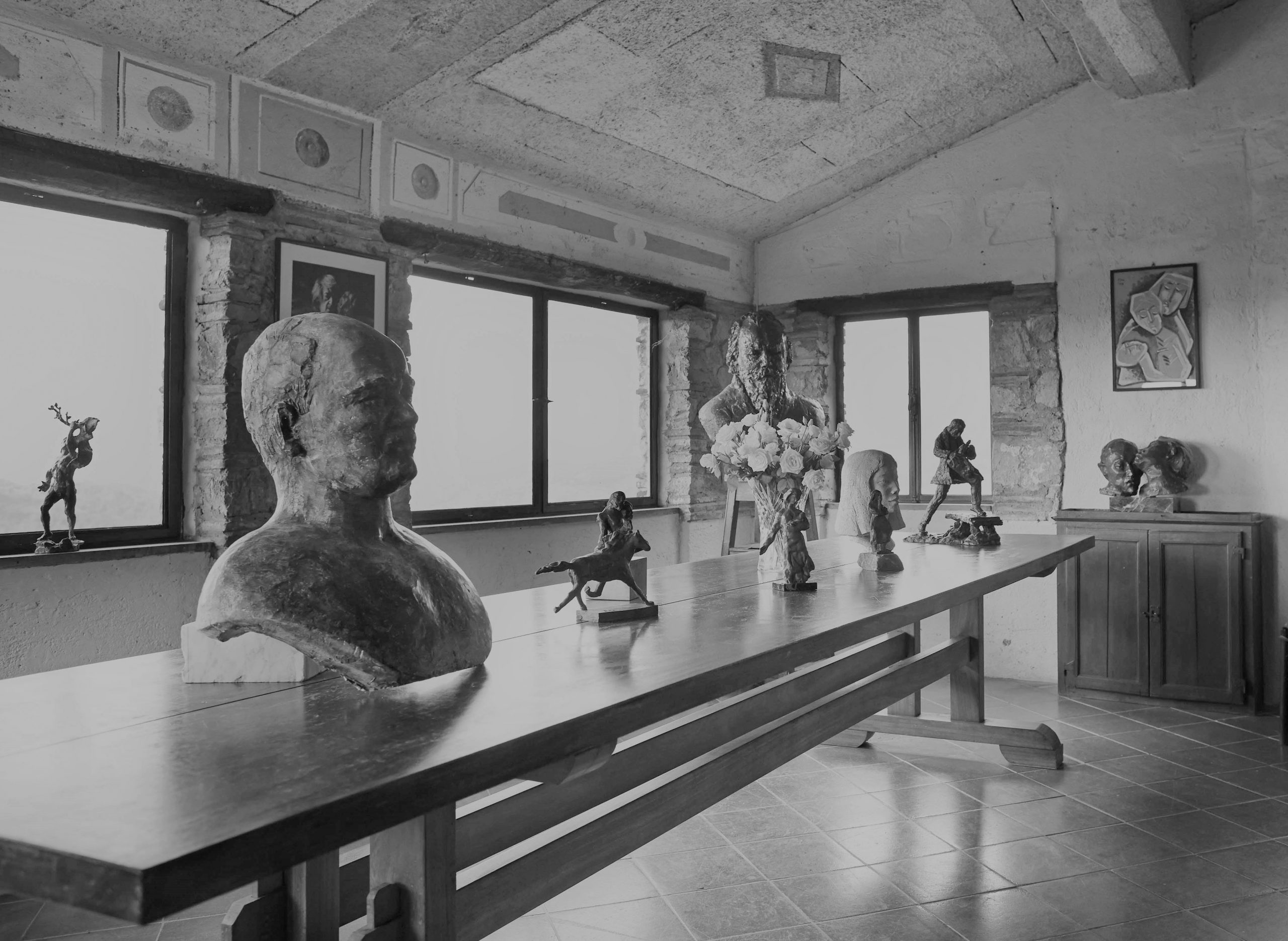 For interested visitors, there is a permanent exhibition of Fiore’s work that can be seen by arrangement.

Visit www.fioredehenriquez.net for more information on Fiore and her sculpture.

Any cookies that may not be particularly necessary for the website to function and is used specifically to collect user personal data via analytics, ads, other embedded contents are termed as non-necessary cookies. It is mandatory to procure user consent prior to running these cookies on your website.